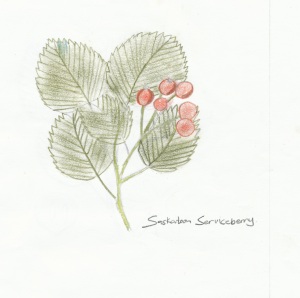 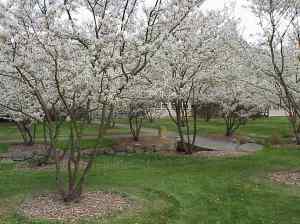 Plants and trees play a very important role in our ecosystems, as they serve multiple functions. These functions include, providing shade for other trees, creating a micro-climate, a source of food for humans and animals, bringing nutrients and minerals from deeper layers of the soil to the surface for other plants to benefit, providing mulched surface for other plants, and assists in carbon sequestration. This is just from one tree, so imagine all the other trees on the planet. For these reasons it is of vital importance that we tend to our trees and maintain them. In order for us to do this we need a deeper understanding of the tree’s needs, such as climate, soil and ideal growing conditions. This profile is an example/guide to learn more about trees and their lifestyle. 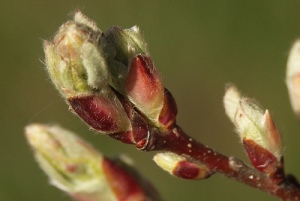 In this plant profile I have chosen the Saskatoon Serviceberry, its scientific name is Amelanchier alnifolia.  The name Saskatoon originated from a Native American noun (misâskwatômina), however, the plant was named after the city of Saskatoon Saskatchewan. The serviceberry is native to the Iowa and Nebraska landscape, but can be found throughout the US. It grows to about 20 feet tall and 15 feet wide in the open. At maturity the tree will reach a maximum height of 25 feet after 20 years of growing.

The serviceberry has a medium growth rate, which means they grow between 13-24 in per year. They are considered to be a small forest tree or perennial shrub, since it has several stems. The trees can be found throughout the United States. The serviceberry shrub can be found at the edge of forests, field and woodlands, and prefers partial sunny to partial shady sites. They are able to grow in moist, acidic and rich soils, but are easily adaptable to dry soils. Serviceberry is also knows as juneberry, shadbush, shadwood, or shadblow. 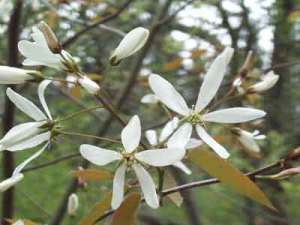 The serviceberry has a lifespan of about 60 years over which it has a four-season appeal. It usually flowers in the spring, bears fruit during the summer, has a beautiful fall foliage (orange and red), and has a ziz-zag pattern of twigs in the winter. In the spring, the plant begins its annual growth cycle, as small white flowers begin to appear from the pinkish colored bud. The flowers appear before any green leaves are mature. Serviceberry is one of the first shrubs to flower and can be found in clusters. After the blooms fade away, the fruits begin to appear in early summer (late in June). These fruits are sweet juicy and are red-purple in color. The actual size of these fruits is 15mm in diameter, with 2-5 small seeds at the core.  The flowering of serviceberry provides pollen for bees in the early spring.

The native people of the land have long used the Serviceberry plant. The tree bark is used to cure stomach troubles, and the twigs are used to make tea to recover patients after childbirth. The extraction of the fruit juice from the plant roots is used in the treatment of colds, chest pains and fevers.

The tough wood proved to be an excellent material for making arrows, for digging sticks, spear shafts and handles for tools. Young stems are used to make rims, handles and baskets. These plants can also be used as windbreaks. The Saskatoon berries are used in making pies and various types of jellies.

The serviceberry plays an important role in the food web. Their large canopy (15ft) is home to many other birds, and serves as an important food source for birds, as berries are picked of the tree by birds over 30 species. Their twigs provide food for the snowshoe hare and red fox during cold winter months. The spring pollen and nectar are an important source for bees and other insects. 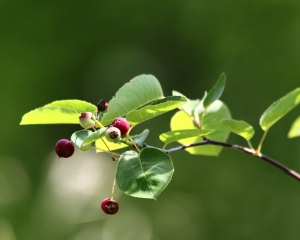 Serviceberries are easily propagated by seed. Ripe berries should be collected during July and August. Berries can be crushed and sieved out to get the seeds. The seed is best harvested (green), when the seed is fully formed, before the seed coat has hardened, they can be planted in pots outdoors. Seeds can be sown in the fall and should germinate next spring. Seeds could take as long as 18 months to germinate. Once the seeds germinate they can be grown in a garden for two years until a permanent spot is found for them. Seeds can be planted at 3 seeds per inch. Germination is usually less than 50%, but growth is rapid (1 ft per year). Root or cuttings may also propagate the plant, however there are not as successful as seed propagation.

Serviceberries can be found in Nurseries, however they can be easily found in the wild, on the edge of forests. Therefore, seeds can be taken from the wild and propagated.

In ecosystems serviceberries provides food for over 30 species of birds, as well as animals such as squirrels, fox and deer. Their large canopy creates a micro-climate for many smaller trees to reside. It also serves as a windbreak for other plants. This tree attracts many species of life, it also allows for the cycling of nutrients. The plant prefers shady sites at the edge of field and woodlands, as well as on the rocky slopes and riverbanks. Serviceberry can usually be found I the wild, as it is require little or no care. 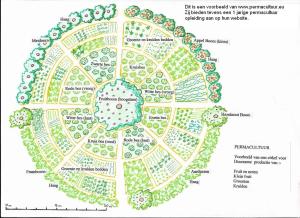 The central element being service berry and location Iowa.

The Alder plant plays an important role in this guild system. The plant fulfills the function of fixing nitrogen in the soil. These trees are fast growing, and create a thick blanket of humus. It grows between 10-25 meters, which provides shelter for understory plants.

The red mulberry grows to a height of 20 m. Fruit fall easily to the ground fertilizing plants that are below it.

Persimmon plants are frost hardy, and grows to a height of 20m. This plant would fit perfect under the canopy, as it likes semi-shade conditions.

Gooseberry- this plant is a thick vine. This plant produces fruit, which attracts many kinds of wildlife. The thorny vines creeps up trees such as the mulberry and alder trees.

Comfrey plants are dynamic accumulators, which means that they roots mind minerals from deeper layers of the soil stratum. Their roots fix nitrogen into the soil. In this guild comfrey will provide nutrients to ground cover plants and herbs, as well as prevent invasive grasses from taking over the guild.

Stinging Nettle is a perennial herb, which assists in nutrient accumulation and as well deters other insects

Borage adds trace minerals to the soil, and benefits any plant it is growing next as well as increasing resistance to pests and disease. Borage makes a good mulch for other plants, as they can cover the forest floor. Borage also attracts beneficial insects such as bees and butterflies to enhance pollination.

Nasturtiums are good companion plants as they excrete a pungent essence into the air and soil, which deter aphids, white fly and root pests. The essence secreted by the plant into the soil helps other plants build their immune system, and thereby being resistant to pests and diseases.

The guild consists of nine plants that are all native to Iowa soil and climate. They all share unique qualities that contributes to their growth and health of the plant. Each plant has a role to play in their own way.

The Alder plant is responsible for fixing nitrogen into the soil. It tap root system probes deep into the group, and absorbs nitrogen from the air and fixes it into the ground. It has a broad and beautiful canopy (32 ft) attracts various kinds of wildlife and creates a suitable micro-climate and protects younger trees underneath them. It also serves as a windbreak and protects other trees from frost. The next tree is a persimmon, which is the central element in the guild. The persimmon is aided by the elder in tree, as it provides protections and from violent winds as well as shade during the summer months. The gooseberry plant is a thorny shrub that creeps on trees. It provides protection from animals who like to graze. The comfrey plant is dynamic accumulator, which

It also acts as barrier plants, which prevent grasses from taking over the guild comfrey is usually planted on the edges of the guild to serve this purpose. Comfrey leaves could be harvested 5 times a year, and used as fertilizer for other crops. Another plants that fulfill a similar functions as comfrey is hairy vetch. Hairy vetch will also fix nitrogen in the guild system, as well as loosen compacted soils for other plants roots to spread out and grow. If planted, it will also attract beneficial insects, and act as a weed barrier. Borage is a herb and when planted in the guild system it benefits any plant that it grows next to increasing resilience, and resistance to pest and disease. This plant will also serve as an excellent ground cover that will reduce evaporation and the need to water. Nasturtiums can be planted anywhere in the guild system, as it a great companion plant. It will deter aphids and root pests, and enhance the growth of other plants. The stinging nettle is a perennial herb, which flower attracts many colorful insects. The serviceberry plant acts as great wind barrier, and deflects string winds. Its early flowering in the spring attracts bees. The red mulberry bush provides a wonderful micro-climate, under which shade loving plants are able to grow and benefit from the fertilizer of the mulberry that fall to the ground.

All the plant in this guild assist each other in pollination, windbreak, shelter from frost and wind, fix nitrogen, prevent weeds from taking over, and assist in pest control. This is all accomplished with choosing the correct plant species suitable for the climate, and stacking them in space and time.

When we stack in space we place the plant in a suitable location so that when it grows it will cover a large surface area. However, when the plant is still young this cannot be accomplished. We therefore use the technique of time stacking by placing other plants between trees to fill I that space, rather then leaving the ground bear.

Plants used in the Guild: 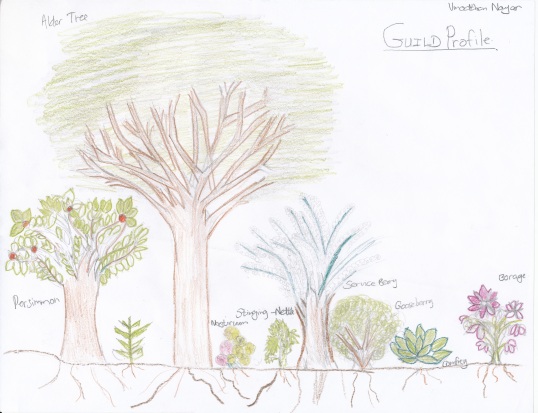